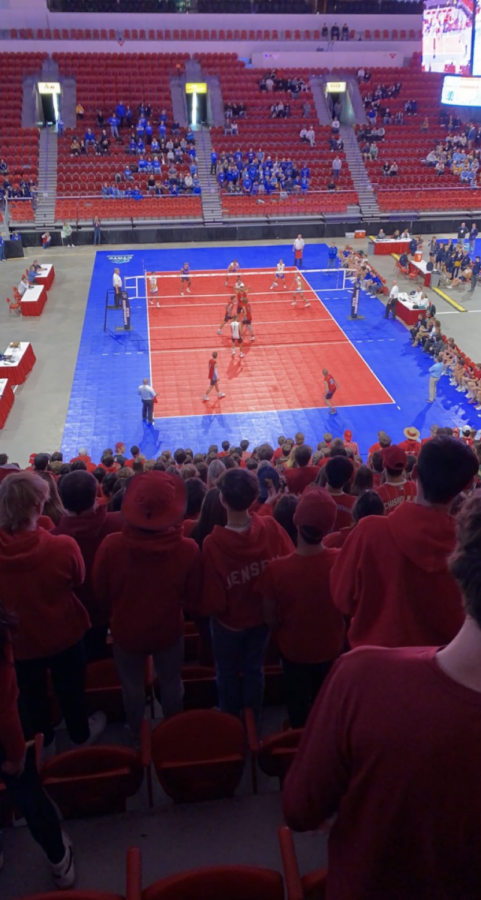 On November 4th and 5th, the Arrowhead boys volleyball team competed in two games for the title of state champions. The games were played at the Resch Center in Green Bay, Wisconsin. Many Arrowhead students were in attendance and school administration marked those absent for the game, excused. The students’ parents had to call the school and tell the office their child would be attending the game.

In the first game, the Arrowhead boys played Catholic Memorial and won three to two, winning two sets of the match.

The game on the 4th took place at 10:00 am and the fan bus left Arrowhead at 7:15 am. Three bus loads of students were taken.

Sophomore Mallory Acton went to the 4th game and said she thought the boys volleyball game was, “Really fun, there were lots of people there and my emotions the whole time were excited, obviously!”

Sophomore Megan Hughes rode the bus to the game on Friday she said everyone was just really excited to see the game. Nobody got yelled at, just minded their own business and did their homework.

The game on the 5th took place at 5:00 pm and the fan bus left at 2:00 pm. Another three bus loads of students were taken.

Corrina Langroehl, a junior, says, “I would rate out school spirit a ten out of ten because we cheer whenever something fun happens and we all come to every sporting event and we all cheer really loud and do cheers”

Langroehl is new to Arrowhead this year, she moved here from Texas.

Langroehl says, “It was my first volleyball game at Arrowhead…and I enjoyed the game a lot.”