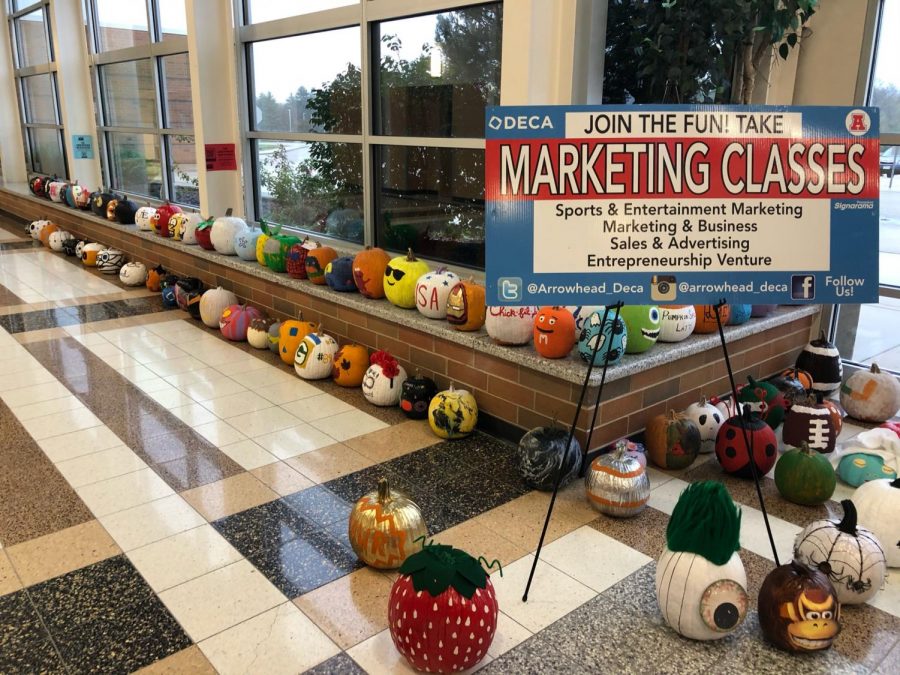 Arrowhead High School’s DECA club made over 130 decorated pumpkins this year. According to the Arrowhead Website, DECA is a competitive club made up of students who are involved in marketing and entrepreneurship. Each year DECA members decorate pumpkins to display at school and around the community. The DECA members also held their Trunk or Treat event at the Downtown Hartland Business Trick or Treat on October 22.

The decorated pumpkins are collected and put on display in places around Arrowhead.

Addison Burkhart is a senior at Arrowhead High School. Burkhart has been in DECA for three years.  Burkhart said, “After we collect the pumpkins, they are usually displayed at libraries, police and fire stations, assisted living communities, and local businesses.”

Grace Dai is a senior at Arrowhead High School. This is Dai’s fourth year in DECA. “The best part of decorating pumpkins is definitely the community response,” Dai said.

Guidelines for decorating the pumpkins are slim at Arrowhead. The only thing a student cannot do is carve the pumpkin. Students are creative with painting. Some examples of the decorated pumpkins are a minion, pineapple, strawberry, Spider-Man, and a scene from a Halloween movie.

“Carved pumpkins rot much faster than painted ones, and we don’t want to give people in our community rotten pumpkins,” said Burkhart.

Burkhart said, “We have done pumpkin painting for seven years now! Trunk or Treat, however, is relatively new.”

DECA did not host a Hawksfest this year because of COVID. In addition, DECA members decided not to ask local businesses for sponsorships because of the current situation.

Dai said that Trunk or Treat went extremely well this year. There were 30 cars set up for the DECA event. Dai said, “It was so high energy all night and there wasn’t ever a down moment!”

The students who decorated a car trunk for the event were allowed to choose any school appropriate theme. At the event, there were a variety of themes including Wizard of Oz and safari, according to Dai.

“At Trunk or Treat, we also had to limit the number of cars, people per car, and ensure that all of our participants were wearing a mask and that they were handing out the individually wrapped candy with a gloved hand,” Burkhart said.