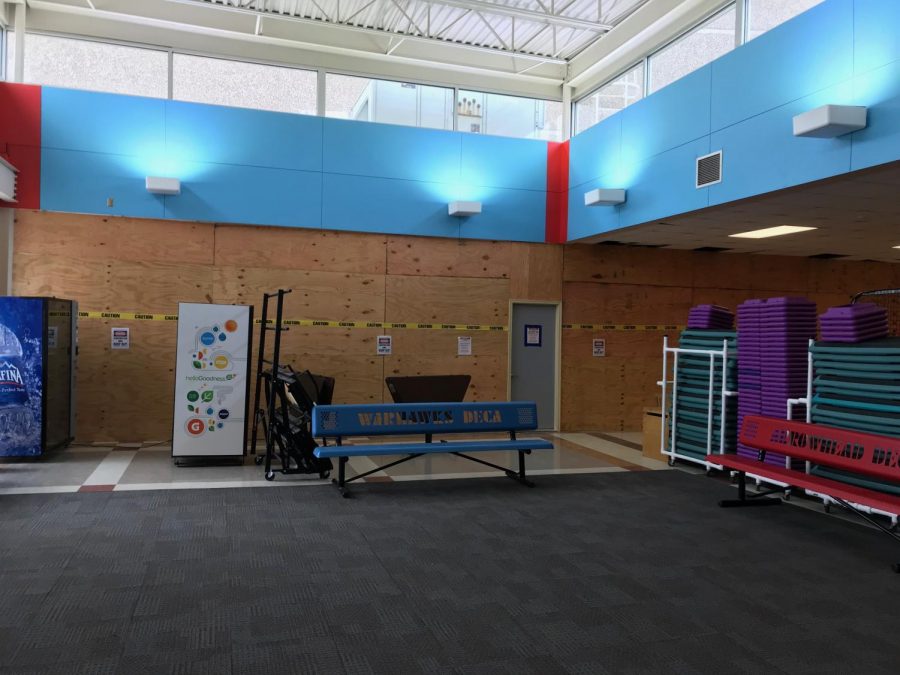 The entrance to the West Gym is sectioned off by a temporary wall.

Arrowhead High School’s West Gym is currently under renovation. Construction started in mid May and is expected to be complete, and the gym ready for use, in August of 2019.

A notification was sent to parents and teachers from the Arrowhead Union superintendent, regarding the construction in the gym. The email included the following information from Laura Myrah: “Arrowhead Union High School has hired a licensed removal contractor to eradicate mercury containing flooring in the North Campus West Gymnasium beginning May 17 and ending by June 7. Although this timeframe may be inconvenient, it is necessary to reduce conflicts for future usage. Work associated with this project will strictly adhere to all federal, state, and local regulations and will be conducted in a safe manner. Along with the licensed contractor, Arrowhead has retained the services of a health and safety consultant to monitor the project and ensure a safe environment.”

In an email, Director of Buildings and Grounds at Arrowhead, Kevin Lipscomb, said, “The existing floor is nearly 20 years old and requires replacement. Planning for this replacement began over a year ago and was budgeted for during our 2018-19 budget development. The removal of the floor is scheduled to occur at the time described in order to ensure the installation of the replacement gym floor, bleachers, and associated remodeling will be completed for use in early August.”

The area surrounding the West Gym entrance contains a temporary wall built with wooden boards and caution tape surrounding. Inside the temporary wall, the doors of the gym are covered in plastic, and workers wear hard hats and gloves as they enter the worksite.

Outside of the temporary wall sits gym equipment that the West Gym once held. Gymnastic mats, step up platforms, volleyball nets, metal chairs, and other equipment now rest in the middle of the lobby of the athletic entrance.

According to Eheinc.com, the hazardous materials being removed could be caused by the rubberized gym floor: “In the case of mercury-containing flooring, the concern is exposure to elemental (or metallic) mercury, which mainly causes health effects when inhaled as a vapor where it can be absorbed through the lungs.”

The article, “Safe Removal of Mercury-Containing Flooring in School Gyms,” by Will Wade goes on to list the symptoms of exposure to elemental mercury, which range from emotional changes and insomnia all the way to kidney damage and death. According to Wade’s article, rubberized gym floors are more likely to contain mercury, like the flooring in Arrowhead’s West gym.

Between the days of May 6 and May 17, Arrowhead students took their AP tests in the West Gym, and many have stated they felt ill in the days following their hours in the gymnasium,  including James Van Gilder, Doruk Celebi, and Patrick Quinn. Another one of these students is senior Connor Zastrow.

“I was in the West Gym for…a total of five hours…I felt horrible during my last AP test. My nose started running. I had a really bad headache and a cough. I don’t know if it was linked directly to the mercury or not, but I know for a fact that it was definitely because of the West Gym and for being in there for so  many days and for such a long period of time with very little breaks while testing,” says Zastrow.

Lipscomb wrote in an email, “The reason for the remodeling is because the 20 year old synthetic floor requires replacement. The entire flooring system is being removed, not the mercury that is part of the synthetic floor composition.”

Lipscomb also wrote the work being done on the gym floor will “strictly adhere” to all regulations, and will be done safely. He said the procedure is “intended to protect building occupants and workers in the space. The project work area is securely segregated from the rest of North Campus and the work is occurring during second shift hours.”