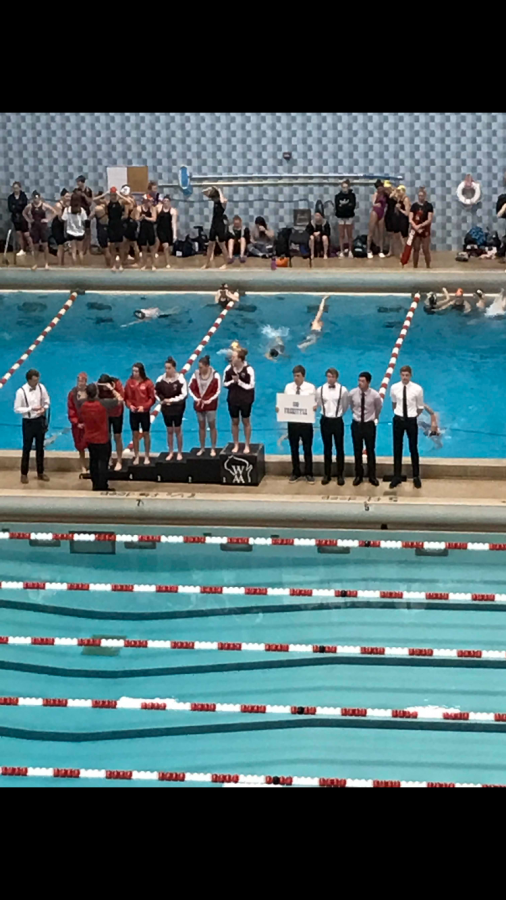 On Saturday, November 10, at the Natatorium on the University of Wisconsin campus in Madison, the Arrowhead Girls Swimming Team competed at State. Diving began at 10:00 AM and swimming began at 3:00 PM.

Kim Grimes, a varsity and junior varsity assistant coach, says “The entire season led up to this event.  The entire team competed at the Conference meet in October, then from 54 girls on the team we narrowed it down to 13 for a total of 18 individual entries, this is the most we can have enter the Sectional meet. Sectionals was last Saturday, November 3 and we won, out of our 18 entries, 14 advanced to the State meet that takes place this Saturday.  We lost the Conference meet to Waukesha South by under 10 points, and won Sectionals by 20.  We are in the running to win the meet on Saturday, it will be very exciting and should be a close meet.”

Grimes says, “It is always fun to see one of the sports teams compete for a State title.  Whether we come out on top as a team or not on Saturday, Arrowhead will be will represented, we should have some individuals and relays that will place very high, if not win a State title, and we’ll represent the school well.”

One thing that Grimes explains is the support from the other swimmers and everything they do for the team. Because without the girls the team wouldn’t succeed. Grimes says, “We always encourage the other swimmers that aren’t competing to attend, because even though there are 13 girls competing at the meet, they are representing the entire team.  If it wasn’t for the TEAM, these 13 girls would not be where they are today.  The team has supported and pushed each other throughout the season, unfortunately, not everyone is able to compete at the State level.”

The Girls Swimming Team has shown numerous times that they should be considered strong competitors. Grimes says, “We have been to State every year, and won State Championships 11 of those years since its inception in 1970.  We have had numerous second and third place finishes as well.  This year again, we are in the running for the State title.”

Alicia Bouton, a sophomore and a member of the Girl’s Swimming Team, says “The team has been pushing for this since the start of the season by practicing everyday after school. I think that the girls going to state deserve a lot of recognition and anyone that goes will see that our swim team is better than they would expect.”