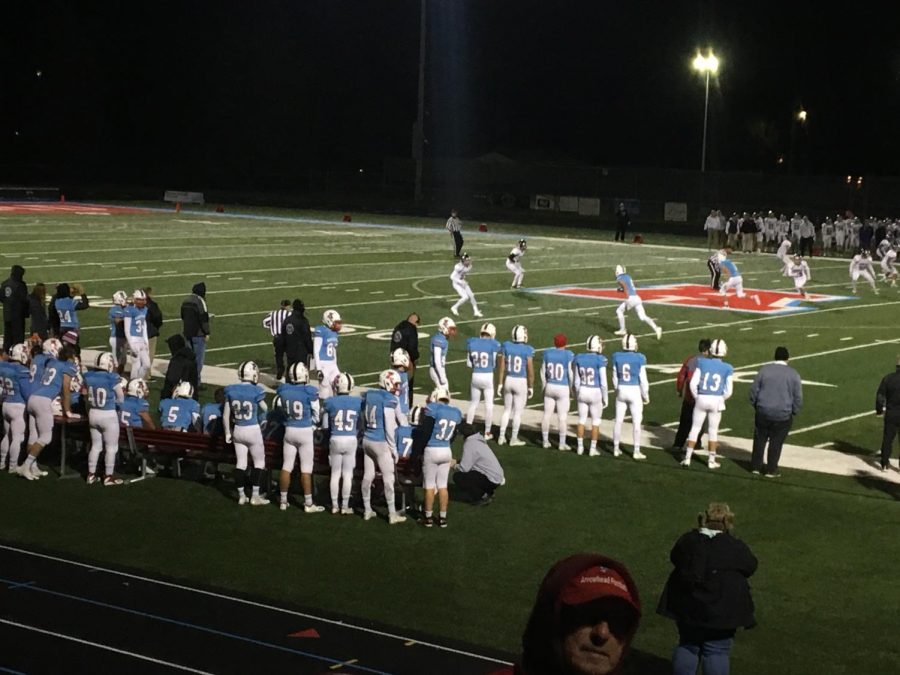 Arrowhead High School’s football team has two uniforms: a red jersey for home games and a white jersey for away games. They also have red and white pants which they wear with each.

On Friday, October 12th, the football team switched it up and wore a blue uniform.

The new jerseys are columbia blue, and have a red and white pattern on the shoulders. The number are white with a red outline.

Arrowhead senior football player Joe Biewer says, “We were really excited to wear them and we tried to keep it a secret to surprise the fans when we walked out.”

Since the players and coaches tried to keep it a secret, when the player wore their jerseys to school, kids were excited.

Senior Barrin Griffin said, “I had no idea they were going to wear those. It was cool to see something different, but I’m still a fan of the classic red.”

This year’s seniors will wear the jerseys once. It was a special way to end the conference season and a surprise for senior night, many of the parents said.

Football player Jacob Schleicher says, “We were supposed to have them earlier for both homecoming and senior night. But they came too late so we only had them for one game.”

There were mixed opinions on the jerseys.

Arrowhead sophomore Logan Gehring says, “Mr. Kaatz [Arrowhead gym teacher and football coach] made them sound like they were horrible…but I think they’re kind [of] cool. They’re something different.”

Now, Arrowhead football has made it to playoffs for the 23rd year in a row. Arrowhead will face Verona today, Friday, October 19th.

Senior football player Jacob Boray said, “I don’t know why they got them…I think the coaches just wanted to show us the fans and the players after us that we have worked hard and have earned the right to wear alternate jerseys.”

Verona has a grass field so now the football team has been practicing on the grass field by the baseball fields.